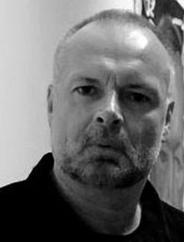 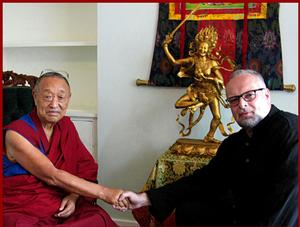 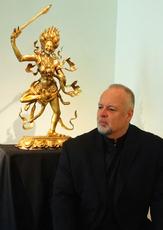 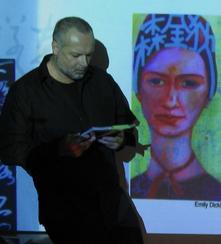 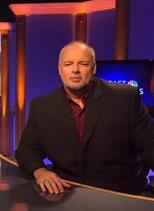 William Rock, is an internationally exhibited artist.  His lifelong creative explorations are grounded with a vast knowledge and respect for many diverse cultures and traditions.  Rock studied drawing at The California Art Institute and The Parsons School of Design in Los Angeles.

William Rock taught himself to paint and sculpt by traveling to museums around the world. He has lived in Los Angeles, Paris and Pittsburgh.  For two years William Rock painted with Chinese brush and ink and has immersed himself in Eastern thought and practice for over twenty years. Rock has studied meditation and taught with Tibetan and Chinese monks. He considers the art making process to be a form of active meditation. He is particularly interested in bridging Eastern and Western culture through the language of fine art.

"William Rock's layered paintings propos​e a consideration of art springing from the world beyond the rational, intellectual realm. The regions these sublime images serve to connect, irritate the boundaries and categories that not only Western culture, but art culture tends to implement...his work taps into the mystical traditions which are as old as humanity itself." -Reviewer New Art Examiner

William Rock has had his art displayed at The Carnegie Museum of Art in shows curated by Helaine Posner and Beryl Wright.  His work has also been displayed in a studio group show at The Los Angeles County Museum of Art.  In 2003, The Kearns Spirituality Center at La Roche College in Pittsburgh, commissioned him to create a centerpiece for their internationally recognized labyrinth.  Rock spent six months carving a 300 million-year old petrified tree trunk, considered one of the hardest stones to carve.  Rock used a pneumatic chisel and a water-powered diamond blade carver. The carved center stone diplays images found in Eastern and Western cultures. The labyrinth and its center stone has been visited by thousands of people.

For five years William Rock explored the nature of self through art.  He created over a hundred images he calls 'self-transcendent' portraits.  In 2006, these portraits inspired an arts event in Pittsburgh entitled 'Spirit Unfolding'. The event featured William Rock's art at The Mendelson Gallery and also at Carnegie Mellon Universities College of Fine Arts.  https://sites.google.com/site/spiritunfoldingnow/

"Rock's multi-layered works represent the process of self-transformation through the presentation of portraits that seemingly emerge from each richly painted surface. they are transcendent works that perfectly serve to underscore the transcendent themes of  the 'Spirit Unfolding' event." -Kurt Shaw, art critic, Pittsburgh Tribune Review

"The inspiration was William Rock's artwork...Rock completes his multi-layered portraits while in a rhythmic state informed by ancient mystical traditions. 'To exist apart from the self is to encounter what some may call the divine or others may call  pure awareness'..."-Mary Thomas, art critic, Pittsburgh Post-Gazette

The events inspired by William Rock's art were held over the course of a month at several venues with a grande finale at Carnegie Mellon University. The events included poetry, dance and music. Rock also gave a talk and led a dialogue entitled 'art and transcendence'. The events were attended by hundreds of people.

William Rock's collaborative art, called The Century Mountain Project, created with the Nobel Prize nominated Chinese poet Huang Xiang, continues to be exhibited worldwide. In October 2009 at The Peter Wilhelm Art Center in Budapest .  In 2010 the city of Tarragona, Spain held a citywide exhibition.  In 2012, twenty paintings were exhibited at The ASA Gallery in Manhattan.

“On behalf of The Dalai Lama, I am pleased to acknowledge the deep significance of the art created by Huang Xiang and William Rock.  It shows an equal respect for all cultures and celebrates the oneness of humanity.”   -Mr. Kunga Tashi, representative for The Dalai Lama

In 2011, William Rock authored the book, "Art and The Transcendent Self."

In 2016 William Rock's sculpture of the Tibetan Bon Buddhist goddess Yeshe Walmo is cast in bronze.

His Holiness the 33rd Menri Trizin, the worldwide head of Tibetan Bon Buddhism declared it "authentic" and a "masterpiece."

In 2016, three of William Rock's figurative sculptures were cast in bronze.  His current focus is the creation and exhibition of bronze sculpture.

From April - June 2017, four of William Rock's bronze sculptures were on exhibit at The Maridon Museum in Butler, Pa.